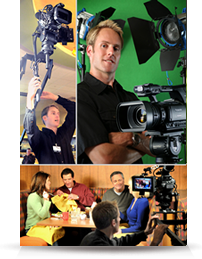 Local and regional broadcast-ready 15, 30 and 60 sec. TV ads, uploaded to the stations of your choice within minutes of approval.

1 min. to 1 hr. videos that highlight the best of what you have to offer,  illustrate your mission or showcase your product, on DVD & the web.